Hero has always been a brand known to everyone who is familiar with the concept of a bike. And why not? The brand has constantly been bringing bikes that best suit the Indian riders and their riding conditions. And one of the prime products of the brand has been the Hero HF Deluxe bike in India.The bike has been gaining popularity right since its launch!

The 100 cc bike became the third most popular Hero bike in India, thanks to its wonderful feature set. The entry level bike from Hero crossed the benchmark of selling one million units in 2015 alone! The bike’s popularity can be seen first hand by the number of Hero HF Deluxe bikes running through the roads.

There are a lot of things that contribute towards the popularity of the bike. From the price of the bike to the engine and the mileage, and other features as well, together make the bike one of the best entry level bikes in the market today!

So if you were wondering what is the reason behind the growing demand of the Hero HF Deluxe bike, we bring to you an explanatory list of all the features that make the bike so amazing!

The growing demand and popularity of the Hero HF Deluxe bike is not unknown to anybody. Hence, it is time to take a look at the features and specifications that are leading to the growing demand of the bike.

The 100 cc engine of the Hero HF Deluxe bike is one of the best bikes available in its price segment. For the lightweight, entry level bike, the engine works wonders. The engine manages to pull off a maximum power of 8.02ps @ 8,000 rpm. The engine is strong enough to glide effortlessly through city roads without being a problem to the rider. Additionally, the engine gives a mileage of 80 kmpl, which helps a lot in saving the rider’s money spent on fuel. The engine of the Hero HF Deluxe bike is definitely one of the best in class! 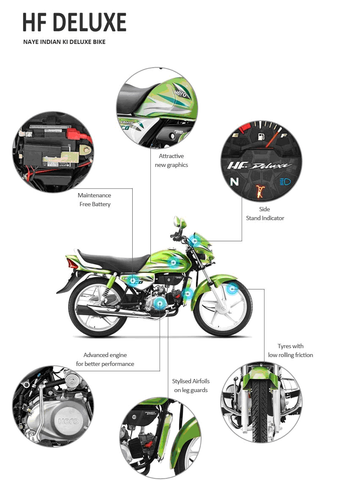 For the maximum security of the rider and of those around him, the brake systems of a bike play a very important role. The amount of control that the rider has on his bike depends a lot upon how efficient the bike’s brake systems are. In this regard as well, the Hero HF Deluxe bike is a winner. The bike exhibits some of the best drum brakes you can find in the segment. Thus the bike is a reliable one to own!

Especially for the bikes made for city rides, the suspensions play an important role in deciding the comfort of the rider. The suspensions are responsible for absorbing the chocks which are very common on the city roads, hence giving the rider a smooth riding experience. The telescopic hydraulic shock absorbers and the swing arm with two step adjustable hydraulic show absorbers present in the front and rear tyres of the bike respectively provide a smooth ride every single time, no matter the number of potholes!

Haven’t we all been through that one time when we fell in love with a thing as soon as we took a glance at it? The same happens with bike customers more often than you can think of! Hence, Hero MotoCorp paid great attention to the design of its Hero HF Deluxe bike to bring you the best looking bike, along with the best features in the price range. The design of the bike is very appealing to the eye, and helps to glide through the busy streets of the city. Also, the dynamics of the design help in improving the overall performance of the bike.

The price of a bike is definitely the deciding factor behind its popularity. This is especially true for the entry level bikes that are mostly targeted towards the middle strata of the social ladder. The people look for a bike that is a true value for money. And that is exactly what the Hero HF Deluxe bike is. With the starting price of the bike starting at around Rs. 50K (ex-showroom price in Delhi), the bike is one of the cheapest bikes to possess all its features.

Along with all the features stated above, the bike exhibits the option to self-start and has tubeless tyres for the comfort of the rider. After knowing all of that, we are pretty sure you’d demand for the bike as well!